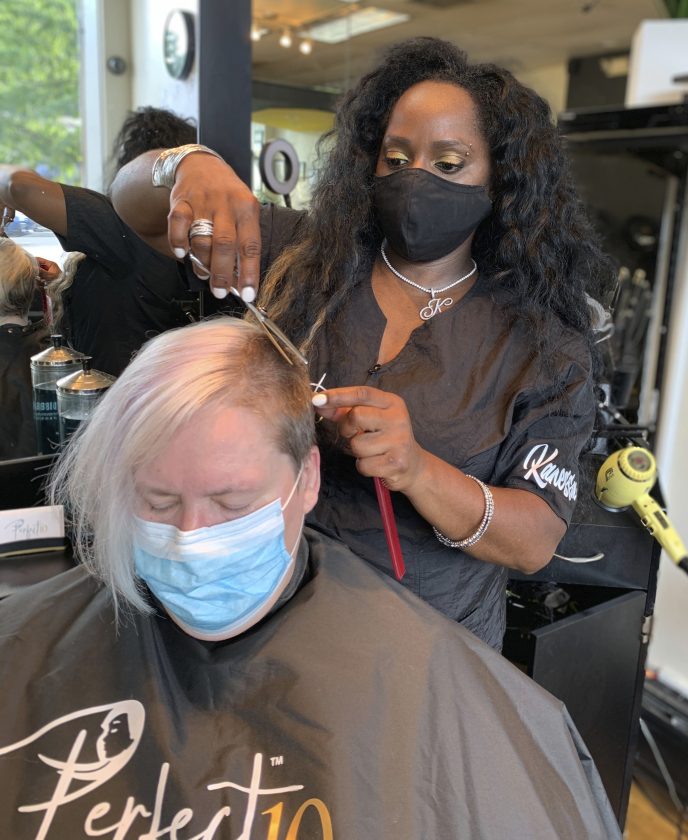 This image provided by Isis Alexander shows cosmetologist Kanessa Alexander as she cuts her client Jennifer Stallion’s hair. After repeatedly being denied service by high-end salons because her hair was perceived as too difficult to style, Alexander opened a shop of her own in a predominantly white Boston neighborhood with four Black stylists serving all hair textures. Alexander and more than a dozen other people of color in the industry trace such bias and discrimination in predominantly white salons to the sidelining of formal education focused on Black hair. Horror stories are not uncommon, from outright refusal of service to botched treatments and cuts by stylists who don’t know what they’re doing. (Isis Alexander via AP)

After repeatedly being denied service by high-end salons because her hair was perceived as “too difficult” to style, Kanessa Alexander took an unusual step. She opened a shop of her own in a predominantly white Boston neighborhood with four Black stylists serving all hair textures.

“I wanted to be someplace where we existed but were not represented,” the African American cosmetologist said of her decision five years ago to set up Perfect 10 in West Roxbury, near where she grew up. “So many salons were just seeing a Black person.”

As a racial reckoning unfolds around the globe, Alexander and more than a dozen other people of color in the beauty industry trace such bias and discrimination in mostly white salons to the sidelining of formal education on tightly curled, coiled or kinky hair.

The lack of experience, or interest, is particularly acute when it comes to hair worn naturally, a growing trend among African American women who want to celebrate both personal identity and Black culture.

“They didn’t learn Black hair. They’ve been taught Black hair is difficult,” Alexander said. “Nobody will come in here and hear that their hair is too difficult.”

About 25 miles from Alexander’s salon, in mostly white Westborough, Massachusetts, Damalyn Matthews knows the struggle firsthand. Matthews, who is white and Native American, has three children with her African American husband. She recently sent her two oldest, ages 7 and 5, to her regular salon, a Supercuts, with her 21-year-old niece, who is white.

A white stylist grumbled that the children’s race should have been disclosed when the appointments were made because: “We don’t cut Black people’s hair here,” Matthews said. While service wasn’t denied, the remark and others like it made by the stylist led to her termination and an apology from the salon.

“The part that bothered me the most is there were two other hairstylists standing there. Neither one of them said anything, nor reported it,” Matthews said. “It’s heartbreaking.”

Such stories are not uncommon, from outright refusals to botched treatments and cuts by stylists who don’t know what they’re doing but are reluctant to say so, fearing legal retribution or out of embarrassment or guilt.

Some cosmetology schools include educators with experience on a range of textured hair, but they’re often stymied by other priorities. While textbooks include pages on all hair types, students said highly textured hair is often barely mentioned during training. Mannequins of color are not routine.

It’s possible to receive a cosmetology license, a process conducted by the states, without ever touching a Black head.

Kayla Naclerio, 23, of Albuquerque, New Mexico, is enrolled in beauty school near her home. She plans to graduate in September.

“They don’t really tend to teach ethnic hair,” said Naclerio, who is white. “I would like to learn how to do Black hair. I don’t really see why there seems to be such a big lack of education on Black hair.”

Keen to learn, Naclerio found her own mannequin of color.

Tammy Jolivette, a Ph.D. candidate at Walden University, studies the psychological roots of biases against natural hair and how those biases affect communities of color. She’s also a Houston hairstylist who specializes in working with curly hair, particularly Black hair.

“Cosmetology programs typically only teach styles and looks for people of European descent. This serves as a tactic of segregation against African Americans. If the salon stylists do not know how to do Black hair, then the business will not have to serve Black people,” Jolivette said.

Serving Black people in the beauty business has become increasingly lucrative. In 2018, the Black hair care industry raked in an estimated $2.51 billion as Black consumers have progressively made the switch from general products to those that cater specifically to them. Black women spend nine times more on ethnic-targeted beauty and grooming products than the average for all consumers in the hair sector, according to Nielsen.

Kari Williams in Los Angeles has a seat on the California Board of Barbering and Cosmetology, which administers exams and licenses in the state. A licensed barber, cosmetologist and salon owner, she specializes in natural hair care.

Williams said few states have licensing and certifications for natural hair, braiding, locing and twisting. Most beauty schools focus on salon safety and sanitation, and the use of heat styling tools and chemicals for straightening, coloring, perming and relaxing.

In Fort Lauderdale, Florida, 30-year-old Britany Bain graduated in 2014 from Aveda Institute South Florida, one of more than 60 independently owned and run Aveda schools in the U.S. considered among the top in the industry.

“The education for textured hair was just completely zero,” said Bain, who is Black. “Whenever we touched on textured hair as a topic it was just like how to straighten it. I had come from the natural hair world. It got to the point where I was saying, ‘No, we need to use this, or can I bring this in?’ It was always ‘No, what we teach you here is the standard and you just use what we teach you to figure it out when you get into the world.’ This is supposed to be the Harvard of cosmetology.”

Kevin Molin, vice president of Aveda Global Education for Aveda Corp., said the company released educational curricula focused on the care and styling of curly and coily hair in 2012. A substantial expansion is launching next month, he said, the “start of our long-term commitment to create an Aveda experience that is fully inclusive.”

Students at Paul Mitchell Schools, another top name in cosmetology education, have made similar complaints. The schools, most also independently owned, recently announced initiatives aimed at including “all hair types as standard learning, not specialized.”

One of the changes is getting practice dolls with a wider range of textured hair, said Paul Mitchell brand ambassador John Mosley, a Black barber in Dallas.

“I feel their pain, and I understand where they’re coming from,” he said of dissatisfied students, including several of color who took to KSNV-TV in Las Vegas to object.

Brittany Johnson is the senior content manager for Mayvenn, a company that connects Black hairstylists and clients. She earned her cosmetology license in California in 2010 after attending beauty school in San Jose.

“All the mannequins had names. The ones that I can remember were Jessica, Beverly and Mia. The one male mannequin was named Jake. The only Black mannequin there, they labeled her Overly Curly. It was the only one there that didn’t have a name,” she said.

When it came time to work on live clients, those of color were sent to the Black students, Johnson said.

“On one hand, I wanted to service these clients because I wanted them to feel comfortable and not have someone who was going to struggle with their hair texture, but on the other hand, I’m like, ‘Well all these other students should learn, too,’ “ she said.

In the Paul Mitchell curriculum, Mosley said, hair is broken down as “straight, wavy, curly and extra curly,” along with “fine, medium and coarse.” Extra curly, he said, can cover a broad range of textures and curl patterns.

“I think it is,” Mosley said. “Hair is hair, not a skin tone. Paul Mitchell is definitely making rapid changes to be able to instruct on more of it.”

Today’s breaking news and more in your inbox

Written by Neha Banka , Edited by Explained Desk | Kolkata | Updated: July 27, 2020 4:42:01 pm Over the years, there have been reports of several incidents where attempts to exercise these haircut rules by school authorities...

9 men’s grooming trends on the rise this year

Pinterest used to be seen as something of a ladies’ domain, where brides-to-be compiled endless photos of wedding decor ideas and make-up mavens swapped tips and tricks.Not any more. The social site, which recently passed the milestone of...