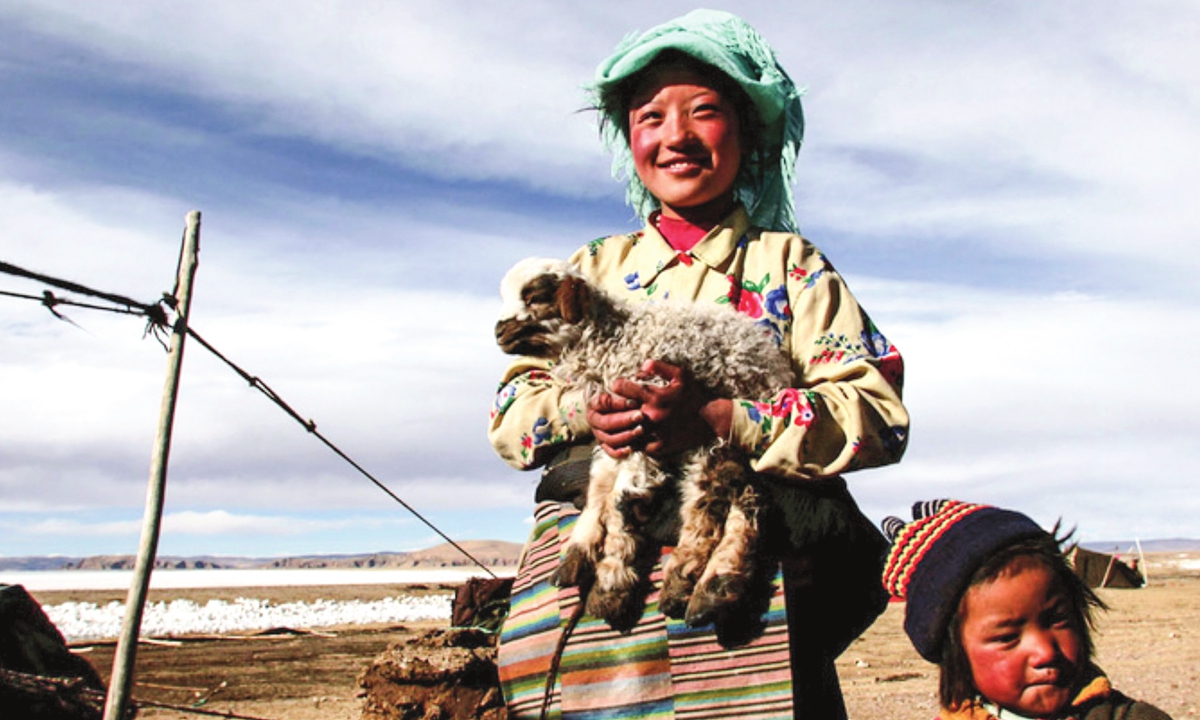 Gesang was abandoned on the day of her birth.

She was found next to a trash can by a community worker in March, with her small less than two-kilogram body curled up in a sports suit, and a black hairband tied around the umbilical cord.

“The infant spent four days in the pediatric ICU before we brought her back,” said Ngongkun Tashi, head of the Xinhu Welfare Institute in the Yushu Tibetan Autonomous Prefecture, Northwest China’s Qinghai Province.

The nine female teachers in the institute never left her side. They slept with her, fed her every few hours and took care of her around the clock.

“Gesang is healthy and laughs a lot, often looking around curiously. We love her as we would love our own baby,” said the 35-year-old Tibetan.

In May, an announcement was published calling on the baby’s parents and relatives to come forward within 60 days. As no one showed up, local authorities issued an adoption announcement in July and invited a third-party evaluation agency in the hope of finding a new home for Gesang.

“We received 10 applications in three days and found the most suitable one after evaluating factors including their jobs, educational backgrounds, and physical conditions and visiting their neighbors and relatives,” Ngongkun Tashi said.

Now, nearly seven months have passed and the once-critical Gesang has grown into what the doctors call a “fat little girl,” who will soon head for her new home.

Besides Gesang, a total of 22 children from a few days old to 15 have been taken good care of by 24 teachers in Xinhu since July 2018 when the public welfare institute covering 12,000 square meters went into operation. Most of the children lost their parents in accidents or to diseases.

“We want to give our children a lot of love, making them feel no different from others,” Ngongkun Tashi said.

“Every day, the teachers take them to school hand in hand and pick them up after class.”

“They have specialized study rooms in our institute to do homework, with volunteers serving as one-on-one tutors,” he said.

“We also provide a basketball court, a playground, an activity room and other facilities to enrich their extracurricular life.”

“Every morning, the teachers comb the hair of our 11 girls. Ponytails, pigtails, braided hair… even male teachers now can do nice hairstyles,” Ngongkun Tashi said.

According to him, the central government allocates 13,200 yuan (about $1,969) per year for every child in Xinhu for their food, clothing and other daily necessities.

“A good standard of living is guaranteed.”

“We will pay more attention to their mental health, chatting with them regularly to prevent any psychological problems,” Ngongkun Tashi said.

Abin, a 10-year-old Tibetan boy from Yushu’s Nangqian County, lost his parents at the age of 8 and was sent to Xinhu with his younger brother and sister.

“A shy and quiet boy at first, Abin is now willing to even start a conversation with strangers – all because of soccer,” Ngongkun Tashi said.

Ngongkun Tashi is a soccer enthusiast and was a top player on the school team when he was at college.

“When we play soccer together, Abin can hunt with good closing quickness and perfect ball control, winning him the title of ‘Yushu’s Cristiano Ronaldo.'”

Sports have brought confidence and healing to the boy.

“Soccer always takes me far away. When running hard, all my troubles are left behind,” Abin said.

“When talking about orphanages, many use words like ‘sadness’ and ‘pity,’ but in fact, every child in Xinhu lives happily. They are angels with positive attitudes and sunny personalities, filling Xinhu with the most beautiful smiles,” Ngongkun Tashi said.

UPS is getting hairier -- and more inclusive. The shipping company is lifting several of its longstanding strict rules on the personal appearance of its employees who interact with the public -- mostly its army of delivery drivers....