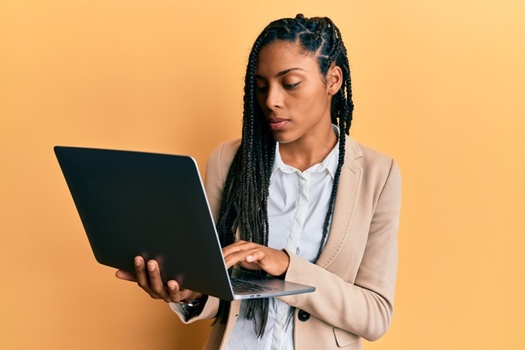 A study revealed Black women were more than 30% likely to receive a formal grooming policy in the workplace. (AdobeStock)

CLEVELAND, Ohio — When Kent State University junior Tayjua Hines was in Catholic elementary school, she was often a target of discrimination because of her hair.

Like Hines, many African Americans have experienced discrimination in school and work environments based on their natural hairstyles, but one bill is trying to change that.

A campaign founded by Dove and California state senator Holly J. Mitchell on April 22, 2019, pushes for passage of the CROWN Act (Creating a Respectful and Open World for Natural Hair).

It was begun “to ensure protection against discrimination based on race-based hairstyles, by extending statutory protection to hair texture and protective styles such as braids, locs, twists and knots in the workplace and public schools,” according to the CROWN Act’s website.

Under H.R. 5309, those who allege discrimination would be able to file a civil action.

Geraldine Nelson, president of Portage County’s NAACP, said there has been a long history of discrimination based on appearance.

“Historically, African Americans or these characteristics that are associated with dark skin, curly hair, you know those socially have been characterized in the negative,” Nelson explained. “And so, we’re saying that that is unequal treatment.”

Within the last few years, there have been many reports of black students, both male and female, being banned from graduation or attending school. The public outcry on the lack of diversity of students’ pictures and hairstyles in one Georgia school resulted in the school taking down the pictures.

Seven states, including California, Washington and Colorado have all passed the CROWN Act, but 17 states, such as Oregon, Florida and West Virginia, were not successful passing it.

The CROWN Act passed in the U.S. House of Representatives on Sep. 21 but is still waiting to be approved by the U.S. Senate.

A local law was passed in Cincinnati this year.

Ohio representatives Juanita Brent, D-Cleveland, and Paula Hicks-Hudson, D-Toledo, both introduced the legislation in the state and understand the national need for the CROWN Act, too.

Brent’s career in politics began when she attended a candidates’ night and learned that the majority of the candidates wanted to reduce funding for the local community center.

Learning the importance of fighting for her community was a catalyst and helps Brent stay motivated to stay in politics. The personal connection to her community has followed her in bringing forth bills.

“I’m a black woman that lives here in America, who, socially, people tell you that you need to wear your hair straight, you need to look this way,” Brent lamented. “And apparently for the most part, even right now, I wear braids and sometimes that’s not always considered as the socially accepted appearance for when you’re working.”

In a 2019 study by Dove, black women were found 30% more likely to receive a formal grooming policy in the workplace.

In that same report, when two images of a woman with a Caucasian background and an African American woman were shown with the same hairstyle, the white woman was rated 25% higher in “job readiness” than the black woman.

The study showed the bias towards African Americans in workplaces and how conformity is introduced.

Nelson said the bill is not only important, but also long overdue. Her organization’s Legal Defense and Organizational fund has also been involved in advocating to end hair discrimination for the Black community, including the 2020 incident of a Black Texan teen being banned, for his hairstyle, from walking across a stage.

Chelsea Johnson, a sociologist who studied the natural hair movement at USC, believes this bill is a much needed first step in protecting women of color, according to a Los Angeles Magazine article.

“These stigmas and associations [over a Black person’s natural hair] have persisted through slavery, Jim Crow, and to the present day,” Johnson observed. “Associations between kinky hair and wildness, craziness, and dirtiness become barriers, especially for women of color working in professional and service sectors here in Los Angeles, across the country, and in many parts of the world with similar histories of colonization and slavery.”

This collaboration is produced in association with Media in the Public Interest and funded in part by the George Gund Foundation.

What is Melatonin and How Does it Work?

Ever feel like you’d give an arm or a leg for a good night’s sleep? You’re hardly alone. Sleep problems are modern problems, with 1 in 3 Americans reporting that they struggle to fall asleep and sleep soundly....